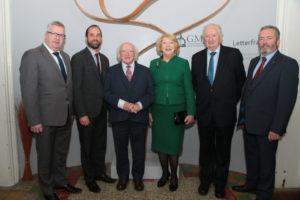 The President of Ireland, Michael D Higgins, visited the GMIT Letterfrack on Friday 10 November to mark the 30th anniversary of the partnership between Galway-Mayo Institute of Technology (GMIT) and Connemara West plc. This partnership has been responsible for the establishment of Ireland’s leading education and training facility for furniture design, wood technology and teacher education. Over that time more than 1,300 graduates have emerged from the campus which was designated The National Centre for Excellence in Furniture Design and Technology in 2013.

To mark this occasion, President Higgins was given a guided tour of the campus, showcasing a range of teaching and learning exemplars, advanced manufacturing technology and applied research. This included a visit to the newly commissioned kiln and log conversion facility in partnership with COFORD, the viewing of student work in the campus Gallery and meeting students who were making and designing projects.

President Higgins’ visit sees the continuance of the long and proud history of the association between GMIT Letterfrack and Áras an Uachtaráin. The President also officially opened a new Communal Furniture Trail which incorporates community recreational and furniture projects designed and made by students of the college, some of which were made from storm-felled trees from the grounds of Áras an Uachtaráin and Phoenix Park.

Members of GMIT ‘s Governing Body and Executive, and Directors of Connemara West, joined with staff and students, local stakeholders and community members in marking the occasion. Also in attendance were those who were instrumental in placing the foundation stones on this partnership including Mr Joe O’Toole and Mr Kieran O’Donohue, former Directors of Connemara West, and former GMIT President Mr Gay Corr, Mr Tony Quinlann, former Registrar, and Mr Jim O’Conor, lecturer, School of Engineering.

President Higgins said: “It is a great pleasure to be here today as we celebrate the 30th anniversary of what began as a most fruitful partnership between Connemara West and GMIT. Here in GMIT Letterfrack, students are encouraged to view art and beautiful craftsmanship as part of the everyday experience, occupying a place at the heart of our communities, enriching our lives and making a profound contribution to our society. It’s wonderful to meet the students and staff again since my last visit three years ago, and see the pieces they have made together.”

Dr Fergal Barry, President of GMIT said: “We are delighted that President Michael D Higgins has honoured us with a visit to GMIT’s campus in Letterfrack and to mark the occasion of one of the most successful collaborations in community development and Higher Education in Ireland. GMIT has a long and proud history of supporting and nurturing sustainable regional development and prides itself in developing links and relationships with a range of external and community stakeholders. No project exemplifies this more so than the partnership with Connemara West and the establishment of a campus within the heart of Connemara.”

Dermot O’Donovan, Head of campus said: “We are proud to have here today graduates who are forging a successful pathway of creativity and innovation in a world unimaginable to those who first established these courses. In a testament to management and staff of both organisations who have carried the torch since then, graduates now emerging from this campus have skills and knowledge commensurate with best international practice who are sought after by employers both in Ireland and overseas. As an example, GMIT Letterfrack student Sean Hogan has just returned from Abu Dhabi representing his country in the World Skills Competition in Cabinetmaking where he was awarded a Medallion of Excellence for his craftsmanship”.

Dr Kevin Heanue, Chairman of Connemara West, said “This innovative educational partnership, bringing together a community development organisation and a higher education provider, ensures a richness of ideas, talent and youthfulness is ever present in the north-west Connemara region.”

“Furthermore, this partnership has stimulated successful collaboration on infrastructure, the development of facilities, and an investment in equipment and capital that enables students to pursue an education pathway of the highest international standard”.

He continued that “from its beginnings in 1971, initially to promote a self-catering tourism project at Tullycross, Renvyle Thatched Cottages, Connemara West is now an integral part of the Connemara community involved in a range of projects such as the Teach Ceoil in Tully, Conservation| Letterfrack, Connemara Community Radio; the provision of services to the local community through the Connemara West Centre; Tigh na nÓg crèche, sports facilities and a range of international education partnerships with colleges from the United States. We look forward to building on all these foundations in partnership with GMIT”.